Wavelength at The Resus @ The Harbour Conference

Our favourite experiences at The Resus @ The Harbour Conference

Interactive, informative and engaging. Here's what you might have missed at last week’s Resus @ The Harbour Conference

The eagerly anticipated Resus @ The Harbour conference last week was a resounding success with a packed three-day program of world-class resuscitation knowledge and training from national and international emergency response experts, as well as a collaborative trade exhibition.

Here are some of the highlights from Wavelength’s ED Recruitment Consultants Emma Gough, Matt Said, Stephanie Nash, and Emma Laidler. 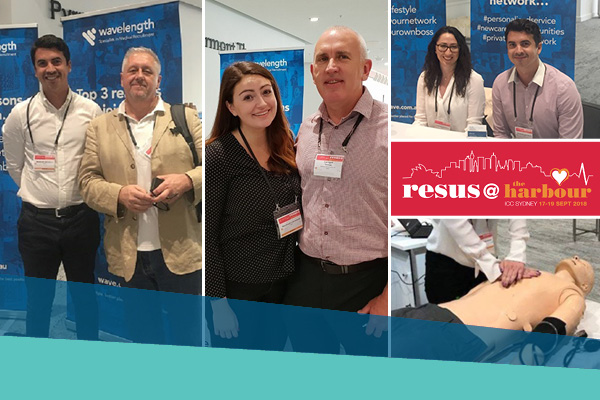 Resus @ The Harbour was all about resuscitation knowledge, cardiac arrest and trauma. Within these themes, what were the buzz topics?

Emma L: One of the buzz topics that stood out for me was around aftercare, and the ongoing support patients and their families require during and after a cardiac arrest. There was a real focus on Doctors connecting with patients and families on an emotional level and appreciating what they go through from their point of view. This highlighted the level of trust we all have in hospital and Emergency Department staff and how that responsibility should not be taken lightly.

Stephanie: We watched a session called Cardiac Survivor with a patient called Sandeep Mane and his wife, who is a Doctor, who spoke about their experiences. Sandeep was only 35 when he had his first cardiac arrest and while he was in ICU recovering, experienced another one followed by an emergency heart bypass. They both highlighted the importance of building an emotional connection with families going through the experience because once they leave hospital it’s only the start of their journey. They spoke about how they still remember and appreciate the conversations and care given by those who connected with them 10 years later. It was an important reminder of the appreciation patients and their families feel for the care they receive in hospital during a very difficult stage in their lives.

Emma G: Another interesting topic for me was just how important time and location is when it comes to resuscitation. In one of the interactive scenarios, the patient was fortunate enough to have a cardiac episode just outside a hospital and was rushed to the ED where a team worked on him to keep him alive. Had he not been so close to people with resus skills, his chances of recovery would have been significantly lowered.

Matt: There was also a woman who was nine-weeks post cardiac arrest who talked about her experiences of the episode. Although confronting and shocking, her session really highlighted what’s happening on a daily basis around Australia. A big focus of the sessions was on the choices first responders and Doctors have to keep patients alive. There was also a big emphasis on the importance of the public being able to perform CPR which plays a huge part in keeping patients alive until they reach hospital.

Which sessions did you find most interesting @Resus? What was different this year?

Matt: The interactive technology at Resus this year was outstanding and enabled the attendees to hear the latest resuscitation advances and developments from all around the world. In addition to the Virtual Speakers, the Liverpool Emergency Medicine team was broadcast via live video link performing a simulated training resuscitation on a patient. The Doctors then asked the audience questions about how they would respond in the same situation and the audience selected their answers on an app which displayed live on screen. This was an incredible opportunity to receive resuscitation training from some of the best ED Doctors in the world.

Steph: One of the sessions I most enjoyed included five-minute flash talks on topics of interest such as Doctors working with patients with Autism, neonatal resuscitation and helping kids who have swallowed batteries.

So there you have it - another fascinating event from the Resus Team. If you couldn’t make it this year, keep an eye on what’s to come from Paul Middleton and his team in 2019.

In the meantime, if you’re a new FACEM looking for your first Consultant job or would like more information on any of our Emergency Medicine vacancies, please contact Matt Said for a wide range of locum ED contracts and Emma Gough for permanent Emergency Medicine job opportunities.