Top 3 pieces of advice for setting goals from a World Record holder.

We work with a lot of inspirational people at Wavelength. Our Doctors are miracle workers and inspire us every single day. We like to regularly reward and motivate our staff to continue to achieve greatness. One way we do this is by inviting significant guest speakers into the office to share their stories with our team, from Olympians to comedians, and everything in between.

Recently we were blown away by guest speaker, Tom Denniss who spoke about his record-setting run around the world and his tips for setting and achieving our own goals! His record was set by running 26,232 km (or 622 marathons) in 622 days, raising $60,000 for Oxfam. The money raised helped to provide food for 2,400 orphaned and vulnerable children in Africa for a year.

With his wife supporting him every step of the way with food, drinks, accommodation reservations and media bookings; Tom was able to conquer the elements - from sub-zero temperatures to the blistering heat of up to 60°C! He was set upon by a pack of dogs, almost fell to his death in The Andes, and had many other life-threatening encounters across the 5 continents that he ran. 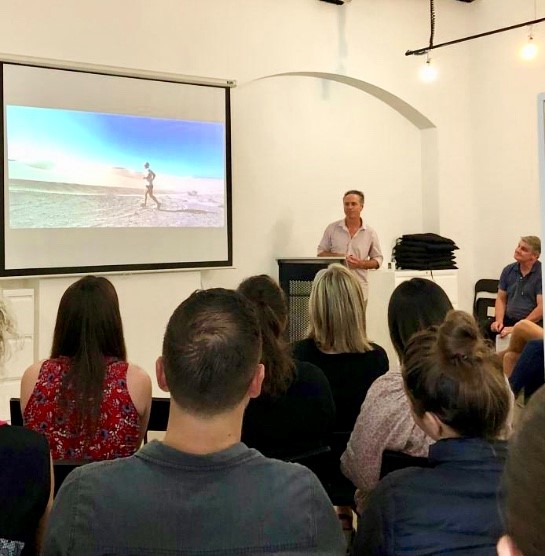 Our team was incredibly inspired by Tom's journey running around the world and hearing about how he stayed motivated to achieve such a challenging goal.

Not only is Tom an incredible long-distance runner (you can’t run much further than around the world!) but he is also a mathematician, scientist, singer, guitarist, painter, and so much more. Tom’s goals didn’t stop at running around the world. Through his company, Wave Swell Energy, he invented a machine that generates electricity from waves, harnessing the power of the ocean as a form of renewable energy. Tom's achievements have made such a positive impact on communities in many countries around the globe including Chile, South Africa, Namibia, the United States, Mexico, Canada, Spain, France, Japan and of course Australia.

Our Wavies thoroughly enjoyed Tom sharing his inspirational story and wanted to know how they could apply his philosophies to reach some goals of their own.

1./ Set ‘big picture’ goals - Don’t be satisfied with minor goals that are quickly and easily achieved.

2./ Once you’ve set a challenging goal, don’t try to achieve it in a day - It’s important to break it down into manageable chunks. This way you’ll be able to see small successes on a regular or even daily basis. This will add to your motivation.

3./ Don’t underestimate your ability to achieve a goal but don’t overestimate it either - It is important to embark on a realistic journey, even though chances of success are not always guaranteed. As John Dewey once said: “Failure is instructive. The person who really thinks learns quite as much from his failures as from his successes.”

Tom truly lives the Wavelength values through and through. He acts with integrity and ingenuity each day and has made such a difference while accomplishing his goals with excellence. More about Tom Denniss here.

Now we're inspired to set some lofty goals of our own!

What goals have you set for the remainder of the year? Add your comments below.