As a trained doctor who’s carved himself a successful non-clinical career in the related industries of recruitment and now biotech start-ups, Wavelength’s co-founder Dr John Bethell was honoured to chair a panel discussion entitled Portfolio Careers as part of the inspiring two-day program.

We caught up with John last week to find out more about the event, how medical careers are evolving and what advice he would give to doctors looking to pursue a non-clinical career.

Tell us a bit about CCIM – What’s it all about? And how were you involved?

CCIM is a forum where doctors who have an interest in pursuing what is now being called a ‘Portfolio Career’ can meet, network and listen to inspirational stories of doctors who have already made the move and get some advice on the various pathways they can take.

As someone who in the mid-90s wanted to get out of medicine to do something different, and had literally no idea who to turn to or where to go, CCIM was something of a revelation. I would have loved a forum like this in the early stages of my career.

I chaired a panel discussion on portfolio careers which are becoming much more acceptable than they were in my day. We’re seeing doctors wanting a better lifestyle and flexibility - basically all the things everyone else in the modern workforce is demanding at the moment. The traditional ‘see your patient in a clinic or a hospital’ model is being disrupted with new technologies such as telehealth, artificial intelligence and digital health. New career opportunities are opening up for doctors at a rapid pace. 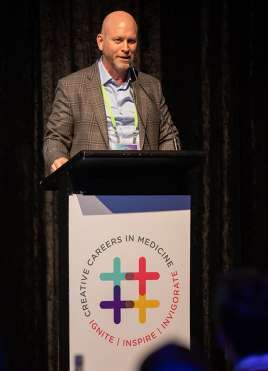 What were the most interesting career transitions you learnt about at the conference?

The speakers on my panel were incredible examples of doctors who have made the transition from traditional medicine to a variety of related careers. Firstly, Dr Rachel MacKellar spoke about her pathway from medical graduate in the UK to hotel doctor here in Australia. She then worked in family planning followed by a role with a medical repatriation company, International SOS, and went on to become an Aviation Medical Registrar for Virgin Australia. Today she is now one of only three doctors to be accepted to a formal training program run by the Civil Aviation Safety Authority (CASA) to become an Aviation Physician. She absolutely loves it.

Secondly, Dr Bav Manoharan is a University of Queensland graduate who tried surgical training, was a Registrar and then embarked on Radiology training. At a certain point, he decided he didn't like either as a life career. Bav has always been very involved in medical politics, participating on policy panels and consulting to various regulatory bodies on the health system. He’s currently a member of the Board of Directors for the Australian Medical Association (AMA) at a state and federal level, and has chosen a path in medical management as a Medical Administration Registrar at Queensland Health. He articulated the options for doctors wanting to move into medical management.

And lastly, Dr Jenny Tran spoke about how she was involved in community projects and helping to educate underprivileged kids while she was a medical student. She volunteered overseas and when she graduated, decided she was much more interested in public health than individual patient care. She explained how by making smart decisions, you can influence whole populations as opposed to just influencing one patient at a time. In order to pursue this career, she applied for a Rhodes Scholarship at Oxford, got it, finished her PhD in Public Health, and has subsequently been picked up by McKinsey and Company, one of the world's most prestigious global consulting firms. She's part of their health division now and is loving every minute. So that's been a very interesting transition from medicine.

You were a doctor for five years before deciding to transition into medical recruitment. Why did you decide to pursue a non-clinical career?

Some doctors really feel they've made a wrong career choice and they'd like to do something different. But medicine is a very prescriptive career path, and so it can be difficult to imagine how you take your qualifications and experience and turn it into something else. As we've discovered, there are many different things we can do.

For me, I really enjoyed medicine and I was very much trained and embedded in that culture. But the repetitive nature was really not for me. Doctors have to be good at repetition to hone their skills. That's what's required by the profession. If you're like me, with a short attention span and always thinking about the next thing, then it's not a suitable fit because you get bored and start to get distracted.

After securing a medical job in Australia I realised two things. One, there was a huge number of British doctors coming out to Australia at the time and the process wasn’t handled particularly well or efficiently by the hospitals. And two, there was a complicated inefficient migration process in the middle that could possibly be turned into a business.

In 1994, I was working in Port Macquarie as a full-time Career Medical Officer in an Emergency Department. In my spare moments, which were few and far between, I was trying to set up my own recruitment business. I soon realised I needed to be in Sydney because I thought, "Well, if you're going to have a business, you've got to be close to the action." I chanced upon a job working as a hotel doctor, which was perfect for me because it was three days a week which gave me a lot more time to work on my business.

After six months, I recognised my business was growing really slowly because I was learning through trial and error rather than through formal training or mentorship. So, in order to accelerate my new career path, I approached a company in the CBD, a large recruitment agency called Morgan and Banks. I asked them if they would be interested in me coming on board and doing what I did for them. So I made the transition into the corporate world, and that was when I had to put on a suit and tie and go and work downtown in Circular Quay.

That was the end of my involvement in clinical medicine. I learned proper recruitment methodology. And of course, while I was there I met Claire who became my Wavelength co-founder and we went on to build Australia’s largest medical recruitment company.

Whilst I’m still a Director of Wavelength, I am also now CEO of BioExpert Network which raises funds for early-stage biotech start-ups. Having brought my broad business expertise and age-old wisdom to the role, I've also learnt an awful lot about equity raising in the biotech world and about the types of innovations coming through.

Why do you think doctors can add such value in related medical fields?

Doctors have a wealth of knowledge about the practical realities of what's going on in patient care. Doctors who can offer expert advice are considered to be extremely valuable assets on the supplier side of medicine, which is now an enormous multitrillion-dollar business globally.

I see this with the start-ups I’m working with. Lots of them are health researchers but when they're talking to me about their latest drug, prosthesis or health aid, quite often they're naïve about how their product will be prescribed or dispensed by a doctor to a patient. They just don't really understand some of the issues associated with what actually happens in a clinical setting.

There is a wealth of career opportunities at companies wanting to work in the health space but that don’t have a real understanding of what happens with patients, on the ward, in the practice, or in the clinical room.

What advice would you give to doctors looking to pursue a non-clinical career?

Firstly, join CCIM immediately because it is such a phenomenal networking group for anyone who’s got an interest in making the transition. Also register or contact us, we provide career coaching advice and can connect you with the healthcare innovators we are talking to about what the future of medicine might hold. We often educate organisations within the health technology and health innovation space about the importance of a doctor’s perspective in developing their new products or services – and unlock opportunities for you.

It’s also important to network ferociously, connect with everyone, get on LinkedIn. Be visible. Demonstrate some initiative. And I'd say constantly look for that first step. You may not know your final destination, but if you're a doctor looking for a creative change just start doing something different, and see where it takes you.

At CCIM there was so much interest from the audience as to what inspired the panelists to change careers. Where did they look for advice? How did they choose their paths? The thing that really struck me was the extent to which, if you look at their CVs, their experience all looks disconnected. But in fact, as they told their stories, everything logically led from one thing to the next.

None of the panelists at CCIM ended up where they had initially intended, and that’s absolutely the same for me. If you sit in your practice wondering but doing nothing, then you'll never know.

Thanks so much for your time John.

Contact us today to organise a confidential discussion around your future career options. Email Carole to talk about alternative careers in medicine today!